Fuel cells are electrochemical energy conversion devices that have the potential to provide clean, sustainable energy. While proton exchange membrane fuel cells (PEMFCs) are currently the leading technology, anion exchange membrane fuel cells (AEMFCs) have emerged as an attractive alternative due to their recently demonstrated high power densities and improvements in durability (1, 2). Because of the high pH environment, it is possible to employ non-platinum-group metal catalysts and less expensive metal hardware (3-6) offering potential cost advantages. Despite the pursuit of new AEMs for this application, no commercially-available, standard AEM exists that is optimized for fuel cell operation and is durable long-term in high pH at elevated temperatures (80 °C or above). As a result, numerous new AEM chemistries have been reported and progress towards commercialization is being pursued. As the work on new materials fabrication continues, the community is in agreement that standardized testing methodologies are required for key material properties: chemical stability, ion conductivity, mechanical properties (6). Ultimately, these ex situ measurements must be validated/benchmarked against in situ real-world tests (5). 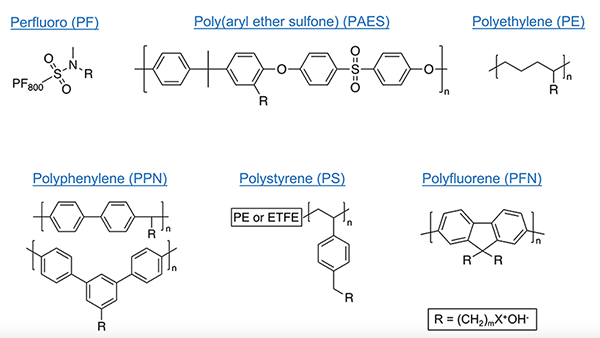 Figure 1. Various types of AEM chemical structures that were explored, where X
designates a hydroxide conducting cation, such as trimethylammonium (TMA). 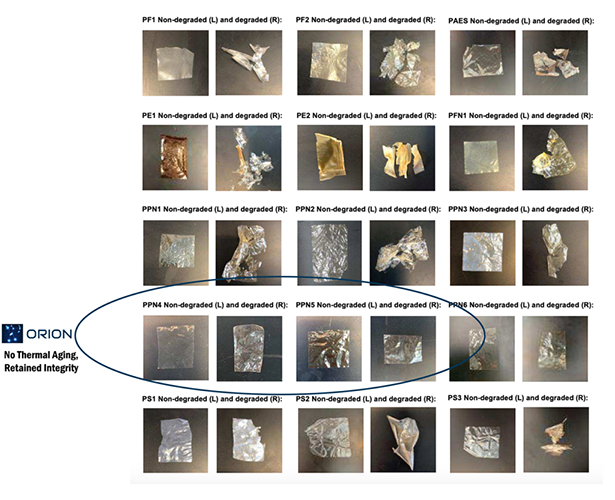 Major strides have been made in increasing AEM stability. Despite progress, significant longevity challenges remain for the stability of hydroxide-conducting membranes, particularly at higher temperatures (>80 °C) (2). To enable robust operation at high temperatures over thousands of hours, next generation AEMs with new backbones and cations are likely needed. Mechanical reinforcements may also be required (6).

Membrane chemical durability tests were performed by placing AEMs in 1 M KOH in Teflon-lined Parr reactors inside an oven at 80 °C for 1000 h. Before and after photos of dry membranes were taken to qualitatively evaluate degradation (Figure 4). It is evident from the condition of the majority of the membranes post-degradation, that the mechanical properties of the AEMs have been drastically diminished. Notably, in addition to the changes visible in Figure 4, several of the 1 M KOH degradation solutions were highly colored after the experiments (e.g., yellow, red, brown). Further mechanical testing is required to expand upon the apparent thermal aging of the membranes, but both IEC and conductivity were measured before and after the durability experiment to quantify the extent of degradation.

Figure 5 (left) shows the IEC loss of the membranes: PPN group membranes showed the least IEC losses, followed by PF group. In Figure 5 (right), PPN membranes also had minimal loss in conductivity, while more meaningful conductivity loss was observed in PF1 and PF2, due to accompanying losses in mechanical properties as seen in Figure 4. PAES and PE groups showed the most significant IEC losses. PAES has been reported in literature to be susceptible to hydroxide attack, and in accordance with these reports we did find significant IEC loss for the sample (10-11). Despite these significant IEC losses in PAES, minimal conductivity loss was observed; likewise, membranes of this type have been demonstrated to achieve >500 h of durability within the AEMFC (12). PE samples showed major issues with loss of mechanical properties and IEC indicating that the samples tested may have had residual double bonds due to incomplete hydrogenation. PS-type samples showed modest IEC loss, but good conductivity retainment in most cases; mechanical changes in the film were observed but were relatively moderate in comparison to PE, PF, and PAES membranes. The single PFN sample tested showed low IEC loss with modest conductivity loss, and the remaining PFN samples are still being tested for durability. Overall, Figure 5 shows that IEC loss did not necessarily correspond directly to conductivity loss. This is likely because conductivity was not only affected by chemical degradation of the AEMs but also significantly affected by thermal aging or loss in mechanical integrity of the films. Nonetheless, AEMs PPN 4-6 were consistent in both IEC and conductivity changes, showing virtually no loss in either (Figure 5) and appearing to be in the same physical condition before and after the degradation test (Figure 4). 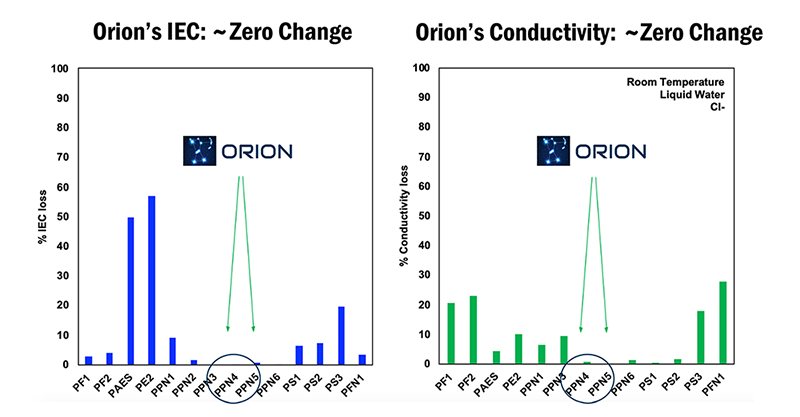 While numerous AEMs have been developed as solid-state electrolytes for AFCs, there is still significant variation across literature in membrane testing procedures and membrane chemistry selection to ensure peak long-term AFC performance. For this reason, NREL has developed a membrane characterization center to allow for standardized, high throughput characterization of AEMs. By employing standardized protocols to characterize AEMs, the properties of numerous membranes were compared, and we were able to identify promising backbone and cation chemistries that could be incorporated into an AEM to achieve peak AFC performance and stability towards hydroxide degradation. Post-degradation investigations into membrane IEC, ion conductivity, and mechanical properties suggest that AEMs are not only undergoing chemical degradation but may be even more significantly affected by thermal aging or mechanical degradation. Because specific changes in chemistry, such as cation type, can have major impacts on AEM performance and are not currently explored in this study, more samples will be needed to draw conclusions on optimal membrane chemical architecture. To date, the overall results of the tests show good retention of IEC and conductivity relative to non-optimized AEMs from 5-10 years ago, indicating significant progress in AEM durability. It should also be noted that many of the AEMs which performed more poorly in the durability testing are in earlier developmental stages and will likely continue to become more optimized toward fuel cell conditions. More tests with more samples will be needed, but this data does help to provide a starting point for standardized AEM comparisons. Overall, results indicate that a polyphenylene (PPN) backbone is a robust choice, providing high conductivity and enhanced durability. and a quaternary ammonium cation should provide high ion conductivity and enhanced chemical durability.